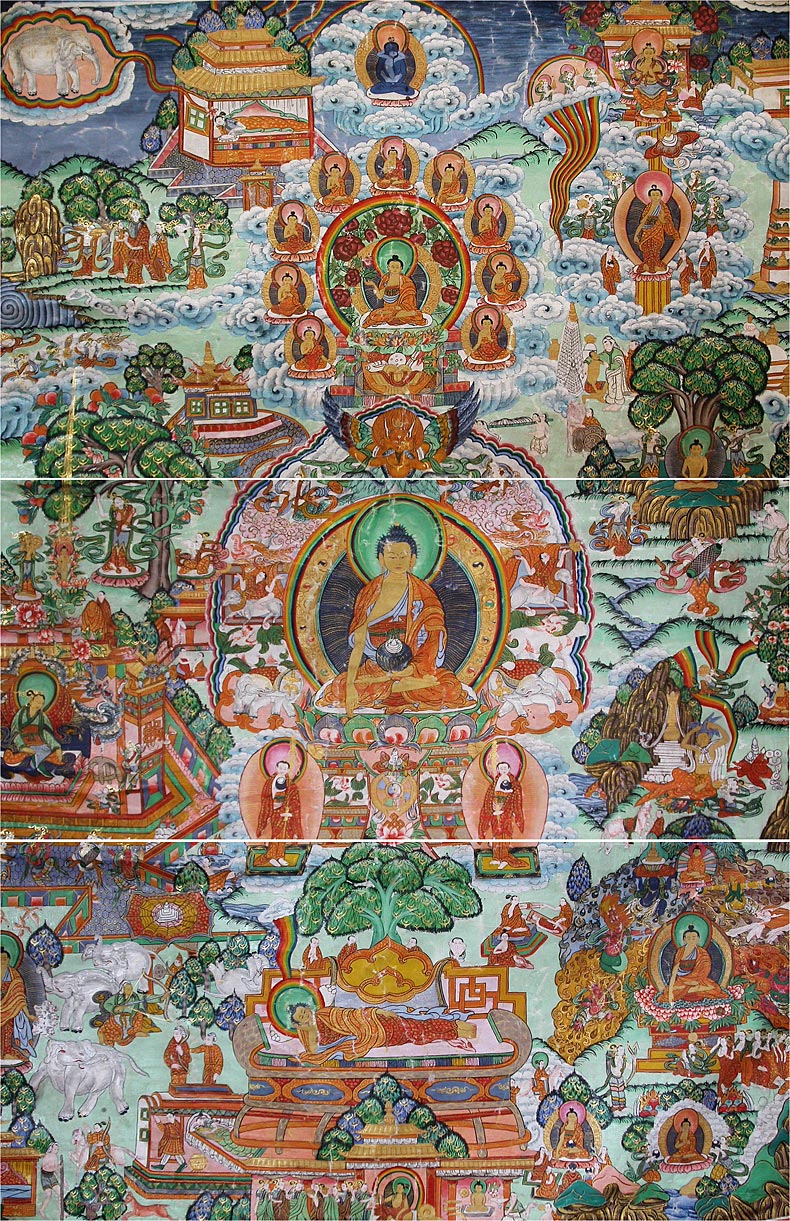 A twice consecrated late 19th to early 20th-century hand painted Tibetan thangka with very good preservation. Elaborated with eclectic scenes of the Buddha's life, Shakyamuni is dressed in a formal orange monk robe, skin golden in color, with eyes downcast in a meditative gaze, dark blue hair curled in small tufts, formed into a large ushnisha on the crown, an urna between the long tapered eyebrows on his fine-featured face, the youthful Buddha sits cross-legged in Padmasana, with right hand placed across the knee, fingers pointed downward in the Earth Witness Mudra (Bhumisparsha), and in his left hand a large vessel filled with myrobalan nectar. This sublime image of the Buddha emerges from the center into a dazzling timeless plane. He is seated in front of a yellow gold rainbow nimbus and green aureola behind him, framed in the center of the Torana Shrine of Six Perfections, with two great disciples Shariputra and Maudgalyayana in attendance below his color-petaled lotus seat. The divine triad is featured within an elaborate throne structure, surrounded by vignettes portraying the twelve major deeds of his life.

Starting from the top center is the Primordial Adi Buddha, Samantabhadra in Yab Yum union. The first Deeds of the Life of Buddha revealed on the right side of the thangka.

1. The Bodhisattva in the form of a white elephant descending from the Tushita heaven. Entering the womb of Queen Mahamaya Devi.
2. The birth of Gautama under a fig tree in the Lumbini Grove around 566 BCE. The Buddha’s birthday is celebrated on the 7th day of the 4th month of the Tibetan calendar.
3. The Baby Buddha took seven steps forward, and at each step, a lotus flower appeared on the ground. He then with one hand pointed heavenward and the other earthward, so declared: Between Heaven and Earth, I am the Honoured One.
4. Prince Siddhartha studying the worldly arts in the palace. He excelled in all things including languages and mathematics. He also became proficient in sports like wrestling and archery. Once when his jealous cousin Devadatta set forth a mad elephant to charge at Gautama, the prince calmly subdued the raging elephant by his sheer countenance.
5. After the experience of observing birth, sickness, old age and death outside of the palace, Prince Siddhartha left the palace at the age of twenty-nine.
6. He wandered as an ascetic, and studied with numerous Vedantic teachers and mastered all they had to teach but remain discontented by the inability to severs the root of desires.
7. The Prince cuts his hair, became a self-ordained monk and began to performing severe austerities in harsh mortification of the body for six years.
8. Then one day he collapsed and was later found by a Brahmin girl who offered him rice milk. The prince recovered, he took a seat under the bodhi tree. Here he resolved not to rise again until enlightenment was attained.
9. As Gautama sat in deep meditation, The Lord of Illusion, Mara, perceiving to distract him from his purpose by various temptations. The Bodhisattva touched the earth, calling it to bear witness the countless lifetimes of virtue that had granted him the merit for enlightenment. In the end, he defeated the Four Maras by transforming the demons' weapons into flowers with the power of his wisdom and compassion.
10. At the age of 35, Gautama became fully enlightened and achieving Buddhahood. This is celebrated on the full moon day of the fourth month of the Tibetan calendar. He remaining seated under the Bodhi tree for seven days after his enlightenment.
11. The Buddha’s Three Turning of the Dharma Wheel. The first wheel turning teaches the Four Noble Truths and Eightfold Path. The second turning teaches "emptiness", and on abandoning the clinging to the self and worldly phenomena. The third turning is about abandoning clinging to emptiness, and on the essence of Buddha Nature.
12. Shakyamuni absorbed in meditation and finally passed into Parinirvana at the age of eighty in the town of Kushinagara around 486 BCE. This is commemorated on Saga Dawa Duchen, the full moon day of the 4th month in the Tibetan calendar. 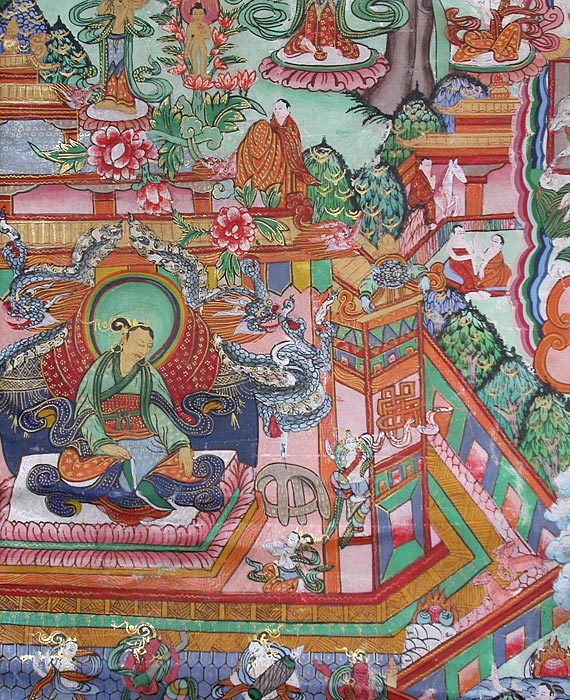 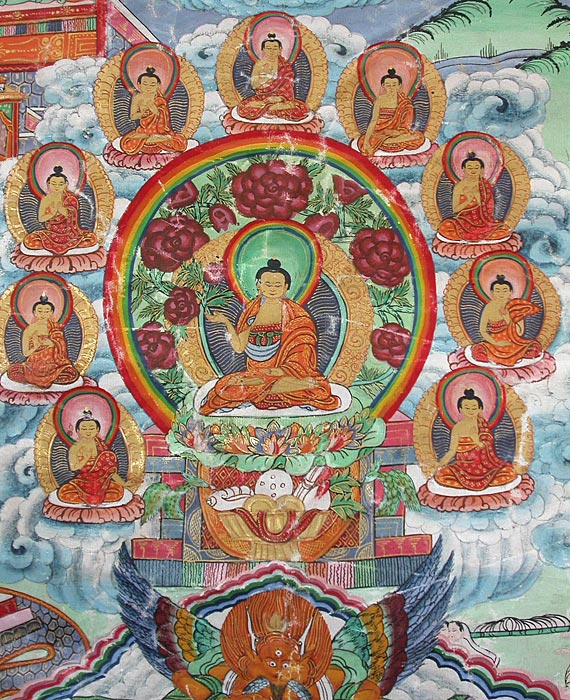 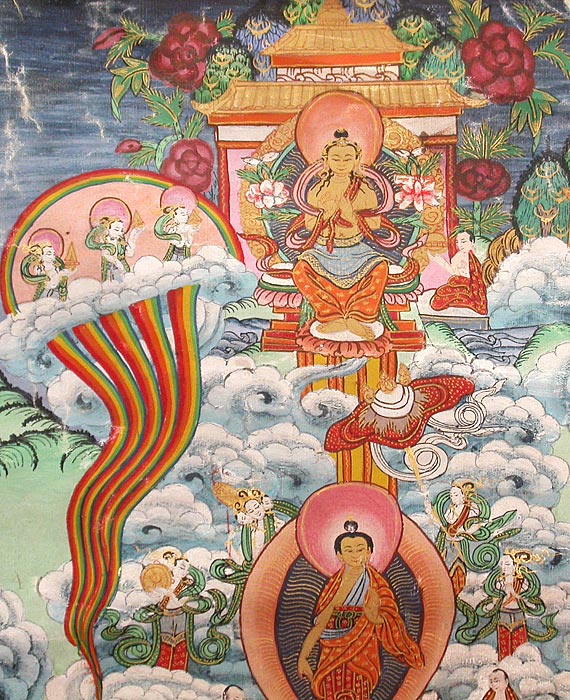 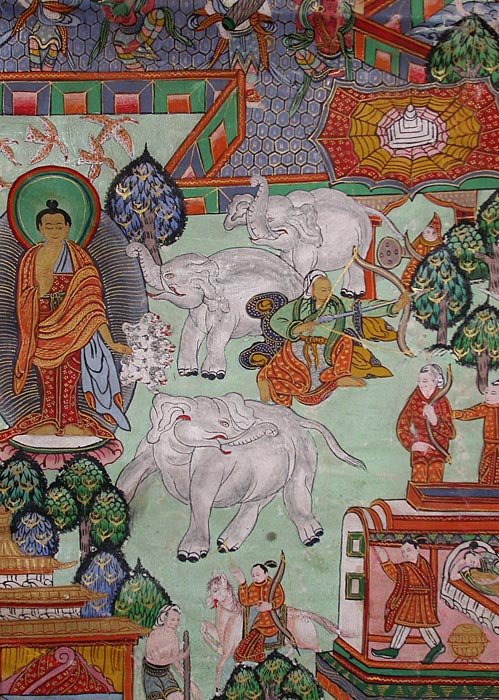 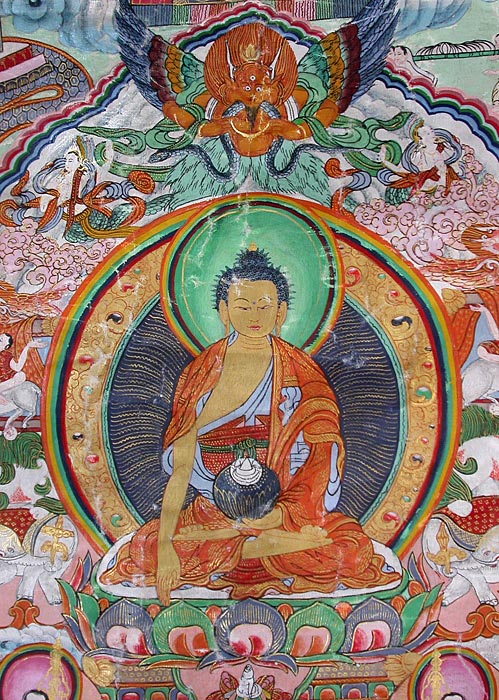 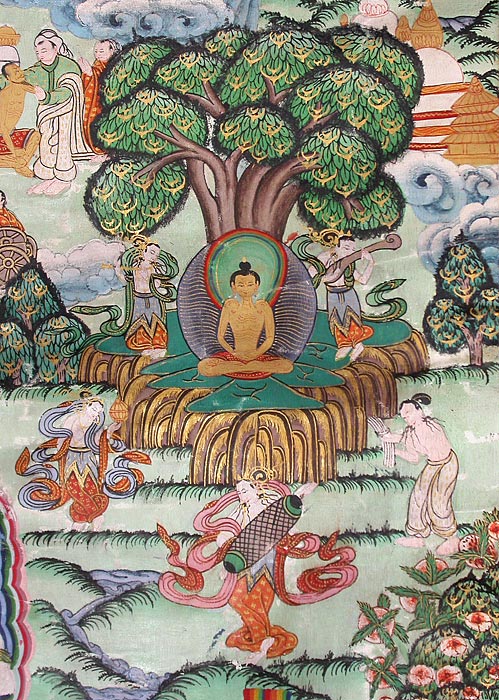 Meditate under the bodhi tree 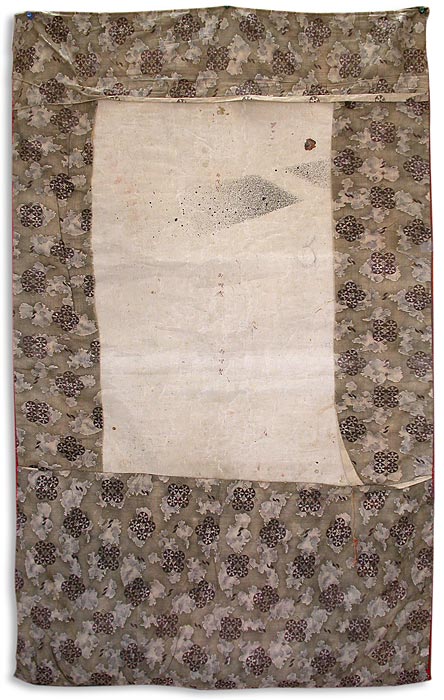 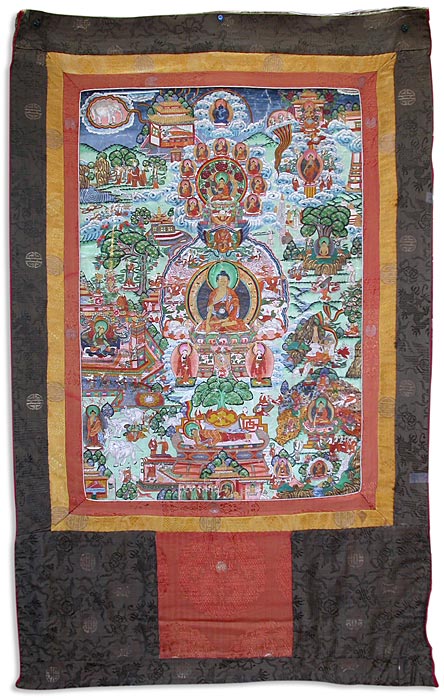