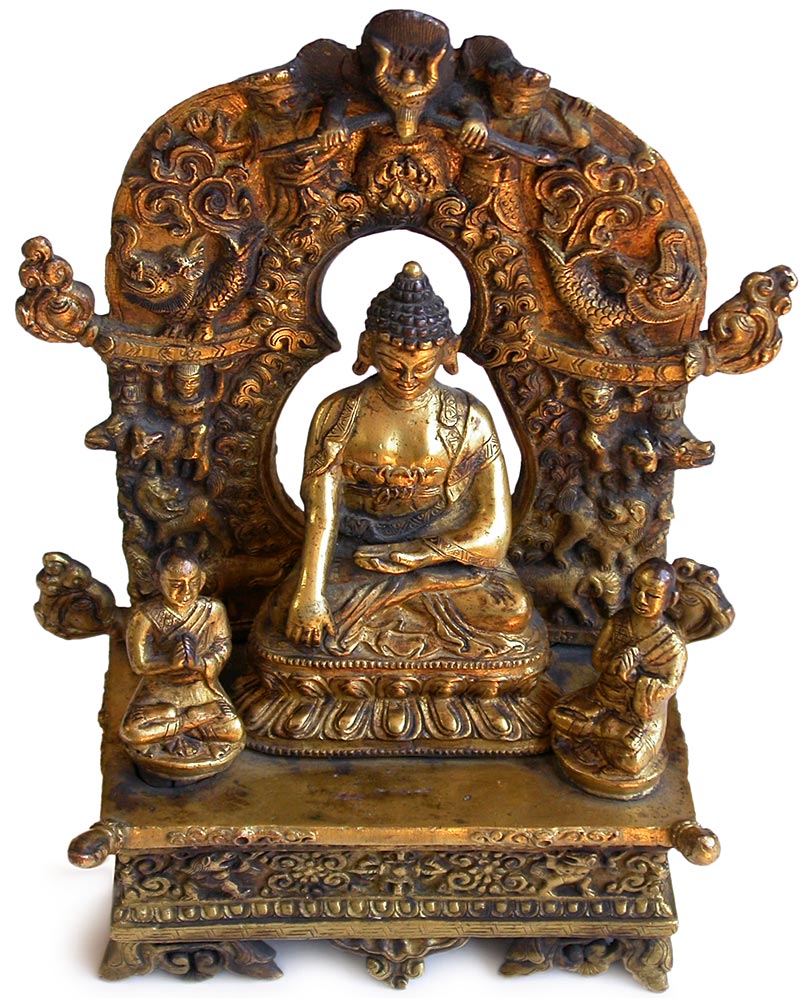 The elaborate arch surrounding an enlightened being is called a torana, a meditational form which reached its height of brilliance between the eighth and twelfth centuries in Tibet and Nepal. Seated in the center on a moon disc above a double lotus, the Buddha Shakyamuni Buddha is in full lotus posture with bhumisparsa mudra known as “calling the earth to witness,” illustrating his attainment of Great Enlightenment. Below him left and right are his two main disciples, Shariputra and Maudgalyayana in postures of prayer and devotion. Behind the Buddha is the intricate torana of the six ornaments, aswarm with entities.

At the top of the altar, rising from the light of six radiant bundled jewels that flame from a lotus bowl, is a garuda (perfection of generosity) devouring a long snake; he is flanked by two bodhisattvas, (perfection of morality,) each with one hand in abaya mudra, the gesture of reassurance and “no fear.” Scrolling down on either side of the bodhisattvas are spiraling forms that rise on either side from the tails of makaras. The makara (perfection of patience) is formed of a number of animals which together possess the nature of a crocodile, having the lower jaw of the crocodile, the trunk of an elephant, the upper tusk and ears of a wild boar, the wide staring eyes of a monkey, the scales and flexible body of a fish, and the extended tail feathers of a peacock. It is frequently seen as a guardian of gateways, combining traditional enemies, crocodile and fish, in a harmonious blending of opposite forces. The makaras stand upon the crossbeam of the torana, which is held aloft on either side by a deva riding a sharabha, another composite animal, (perfection of effort) appearing here as a horned goat merged with a boar-headed dragon whose serpentine tail coils down the pillars of the torana. Beneath the sharabhas are two roaring lions (perfection of wisdom) who ride on the backs of elephants. The motif of the lion on the elephant’s back is known as the gajasimha, (the combined strength of these two lords of creatures.)

Curling clouds tipped with large jewels rise from two levels on either side of the crossbeams and the floor of the torana, the whole fitted into an elaborate square base which was set with jewels. In place of the lions indicated for the four sided base are lion headed figures on either side of a central vajra. On the reverse of the piece is a fine engraving of a lotus with leaves and buds within a cartouche surmounted by an inscription identifying Shakymuni Buddha as the deity. On the bottom the piece has been sealed and engraved with a double vajra, indicating that a ceremonial ritual was performed upon the completion of the statue; certain written prayers or relics may be concealed inside. 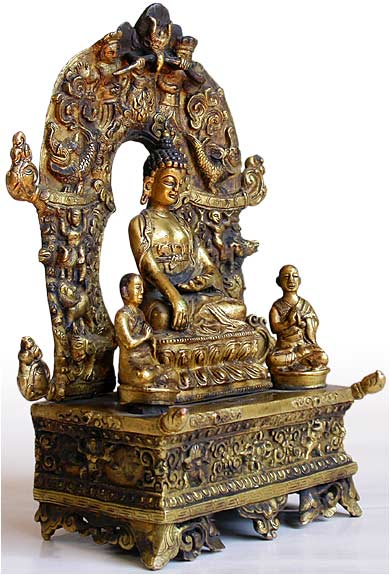 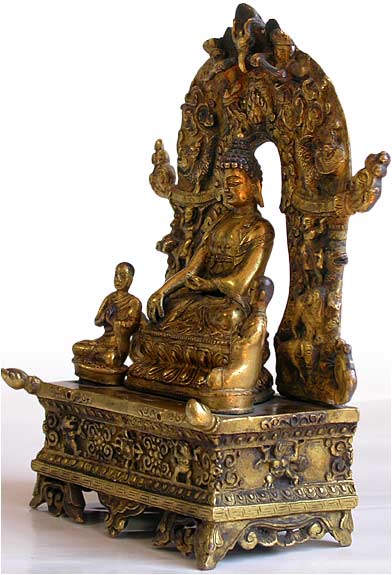 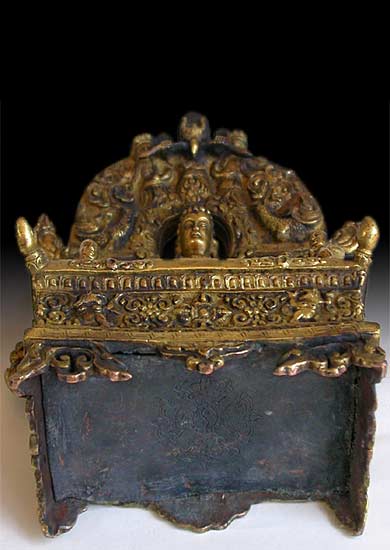 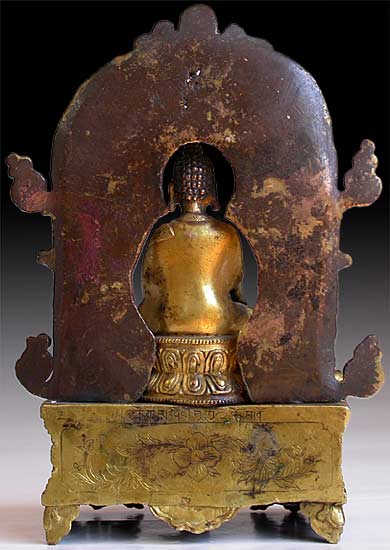 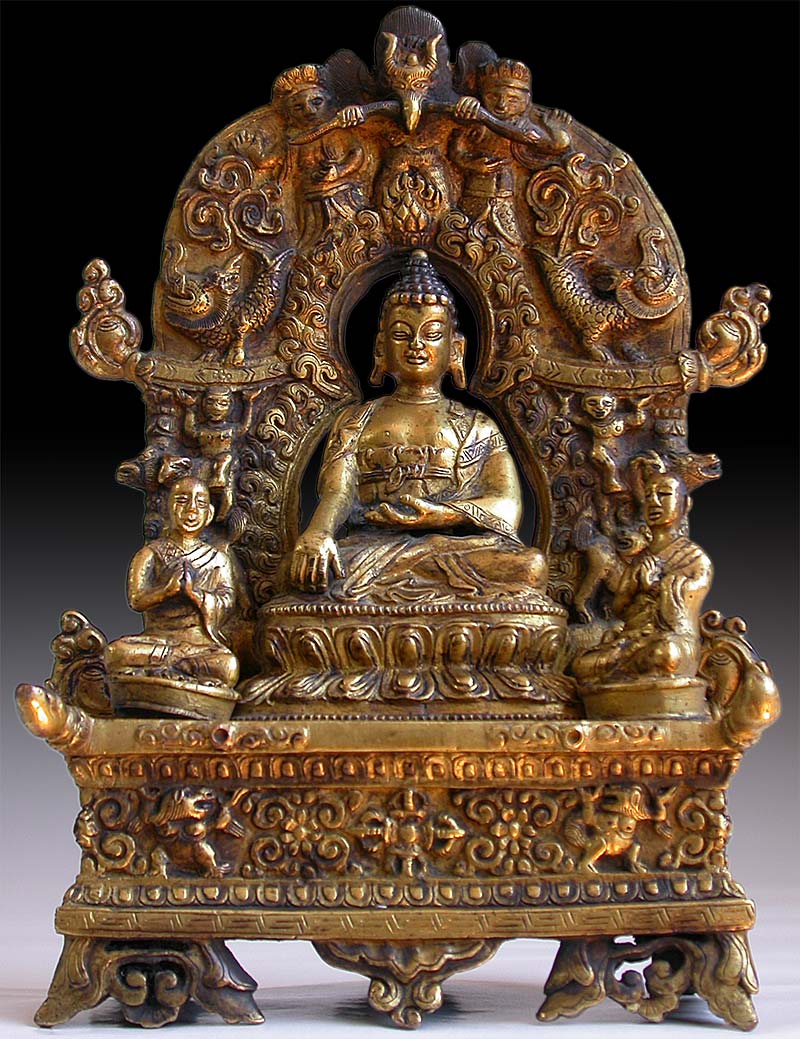