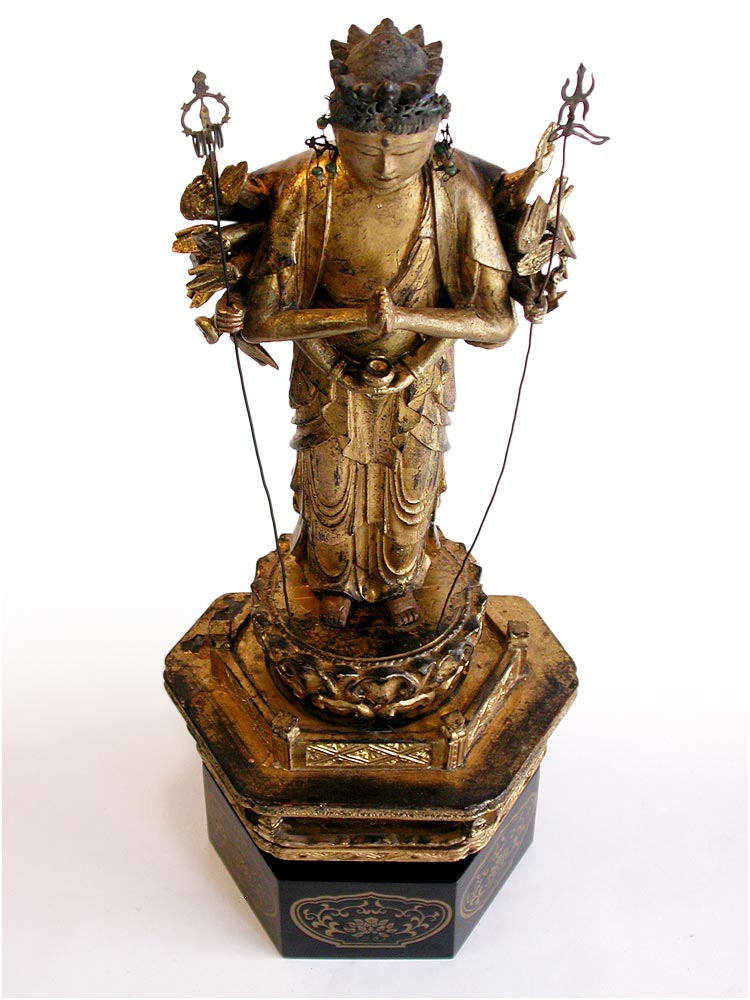 Antique Japanese Gilt Wood Statue
An exquisite Edo period Sanju Kannon Bosatsu, standing on an original lotus pedestal, above a newer hexagon-shaped lacquer stand, with her two upper fore-hands in the Anjali Mudra, and lower fore-hands are holding a vase of nectar by her waist; of the twenty-two hands to her sides, a trident and a shakujo staff held in two hands. She has a benign young girl profile, downward cast eyes, and a slight smile. Above the superb rendering of the pious youthful features, she wears a jeweled copper crown, with a halo mounted to the back and a few jewels since missing. There are some filled crack lines and regilding both in the hands and face. Despite these minor imperfections, the symmetry and figure are in a firm and good condition. There's a marvel of subtlety emitting deep feelings and inspiring compassion in this rare Thousand-armed Bosatsu.

Avalokitesvara is a Sanskrit term that translates as the Lord Who Regards All. Most scholars believe he was originated in India, and proliferated to China and Japan as the Goddess of Compassion in the 7th century. Her name Kannon 観音 (Chinese: Guan Yin ), translates as "The One Who Hears the Cries of the World." As stated in the Lotus Sutra 妙法蓮華経 (Myoho Renge Kyo), Kannon has 33 different manifestations. Senju Kannon is the esoteric Bodhisattva with a Thousand Arms. She protects sentient beings in the six realms of karmic samsara. In the single most commonly recited and studied scripture in East Asian Buddhism, Kannon famously stated in the Heart Sutra 心經, "Form is emptiness (Sunyata). Emptiness is form". She teaches the fundamental Buddhist teachings such as the Four Noble Truths that none of these notions apply in emptiness. This teaching is the essence of the compassionate Kannon — to aid those in difficulty in the earthly realm and help them achieve salvation. 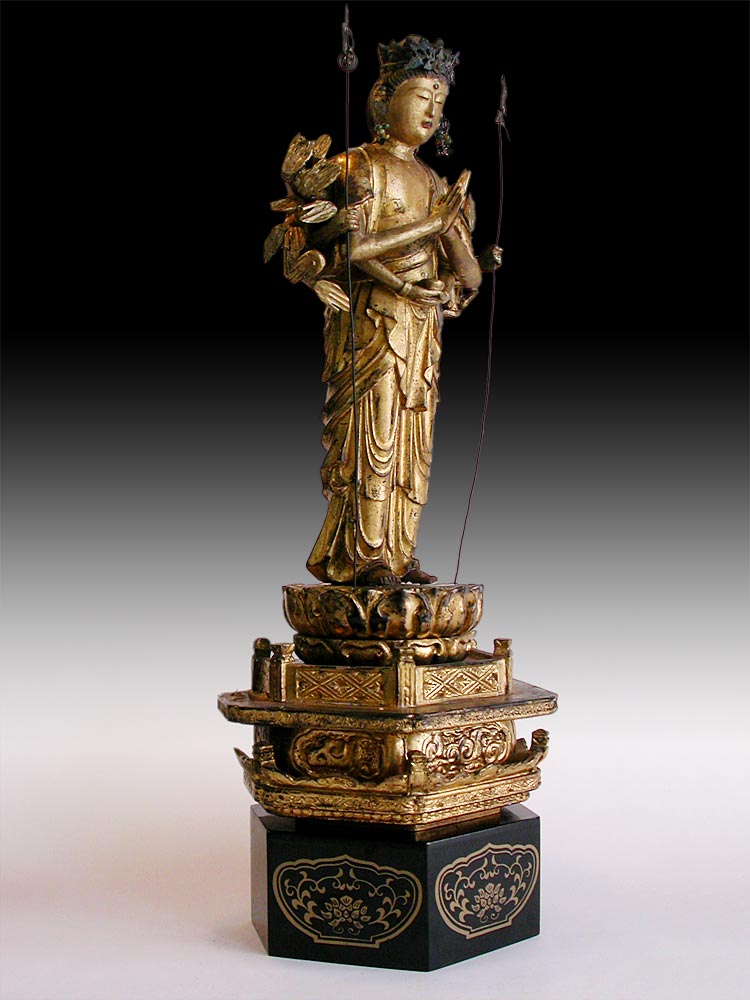 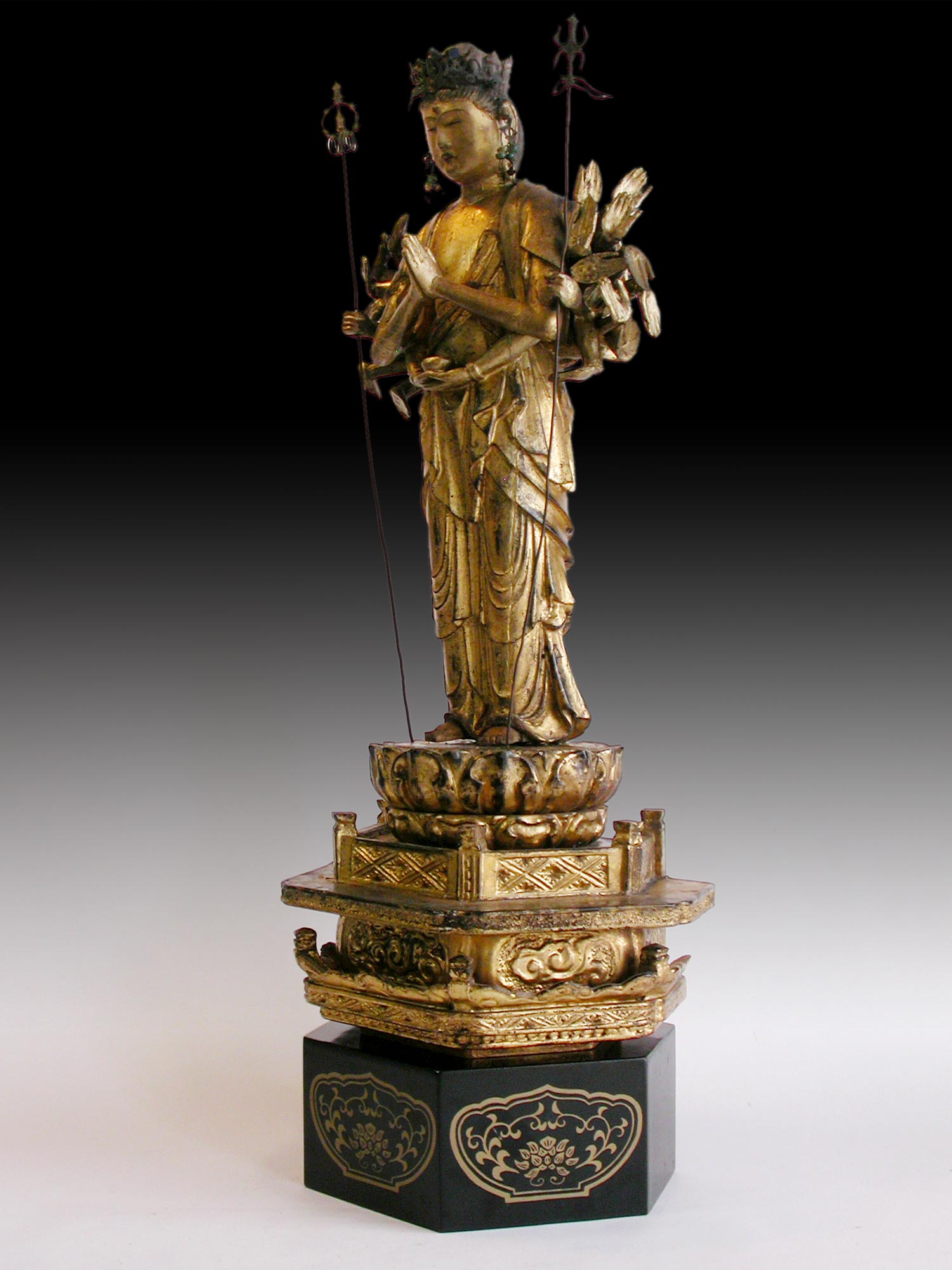 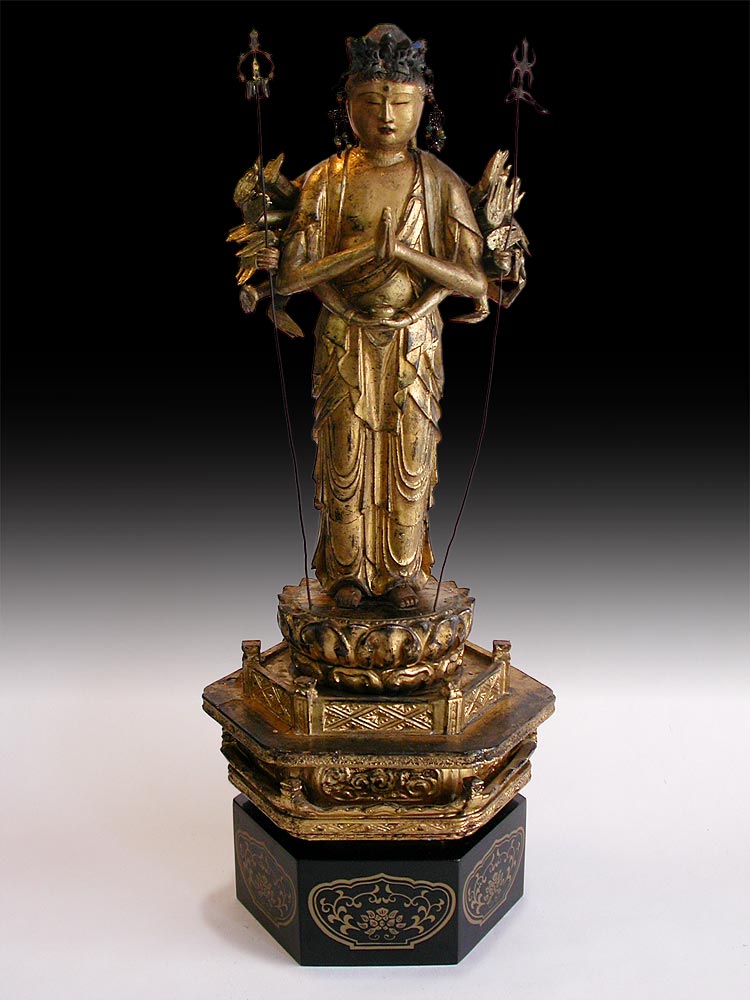 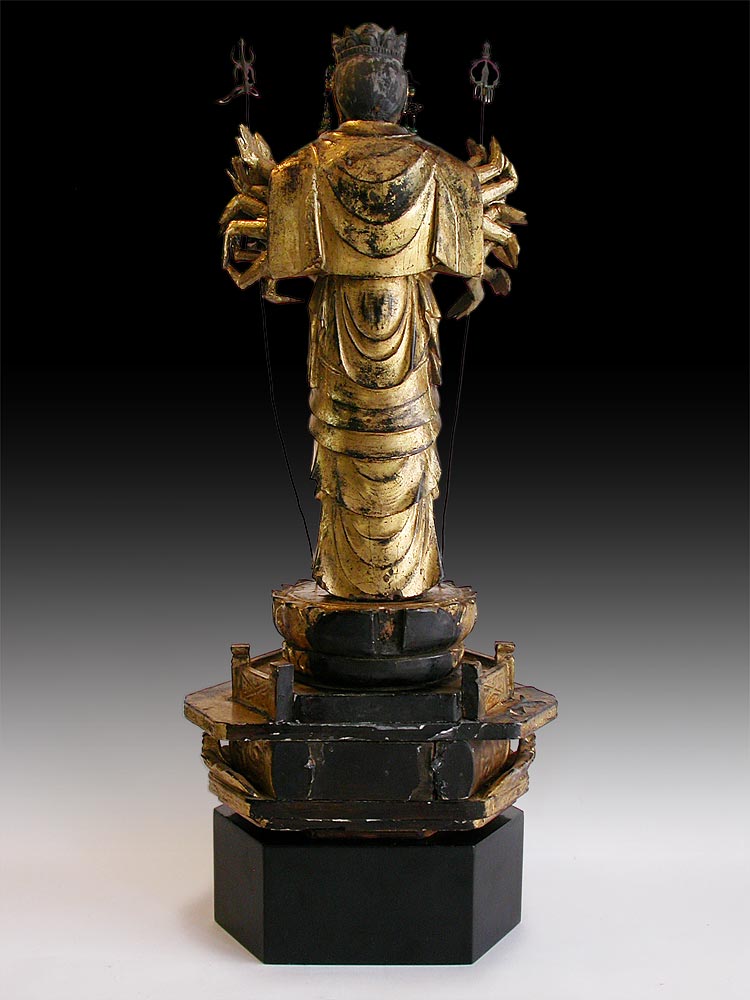 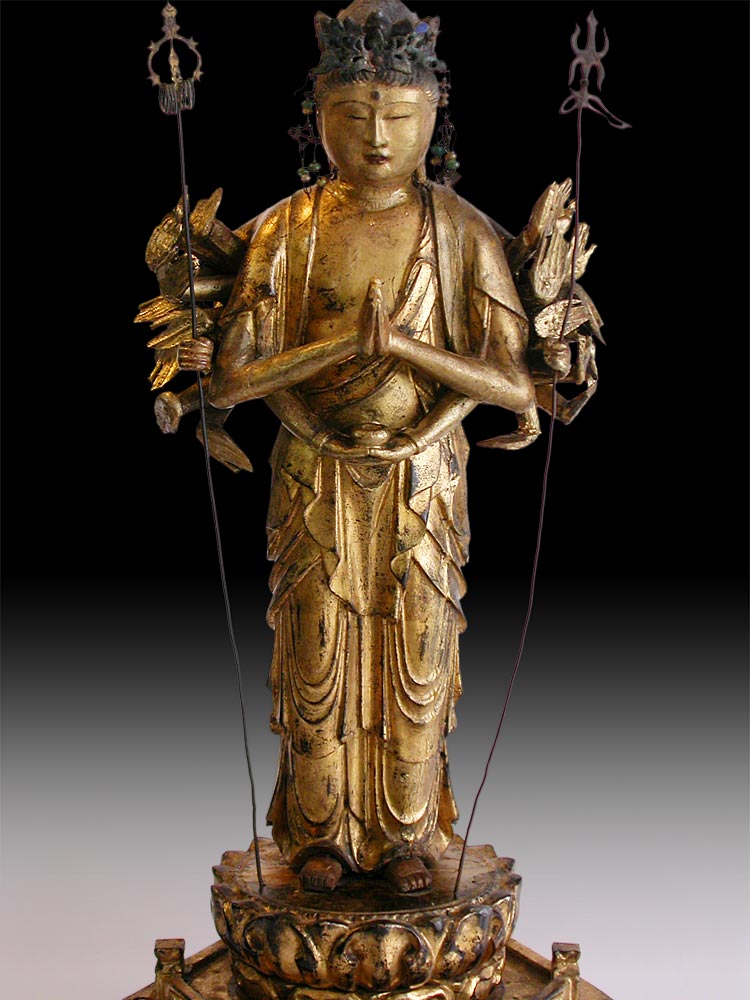 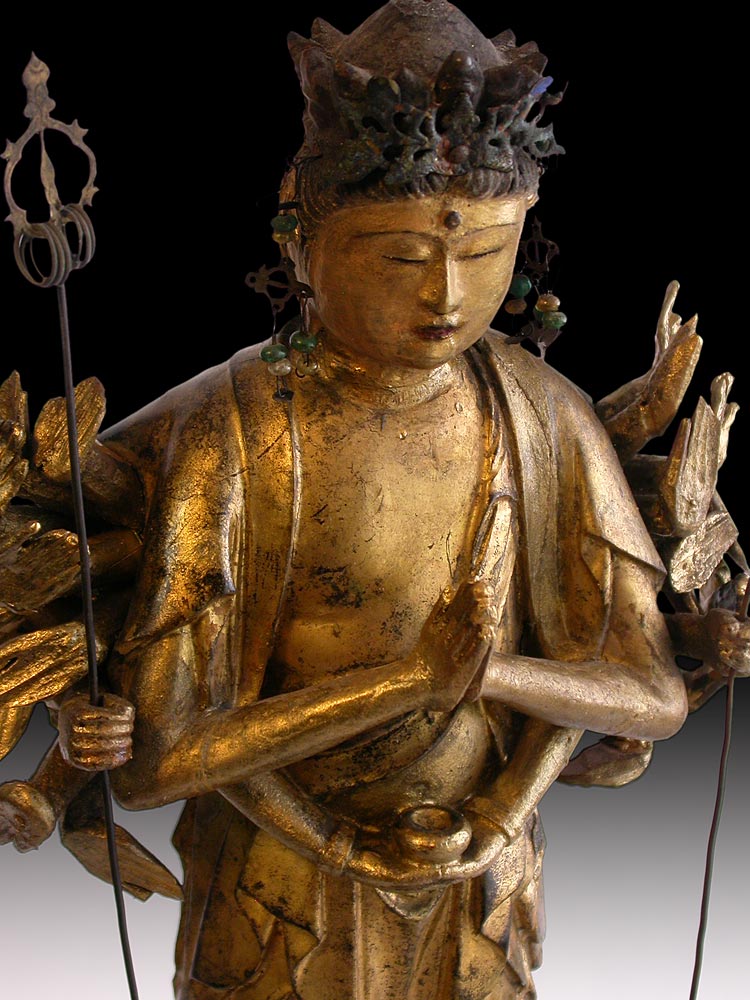 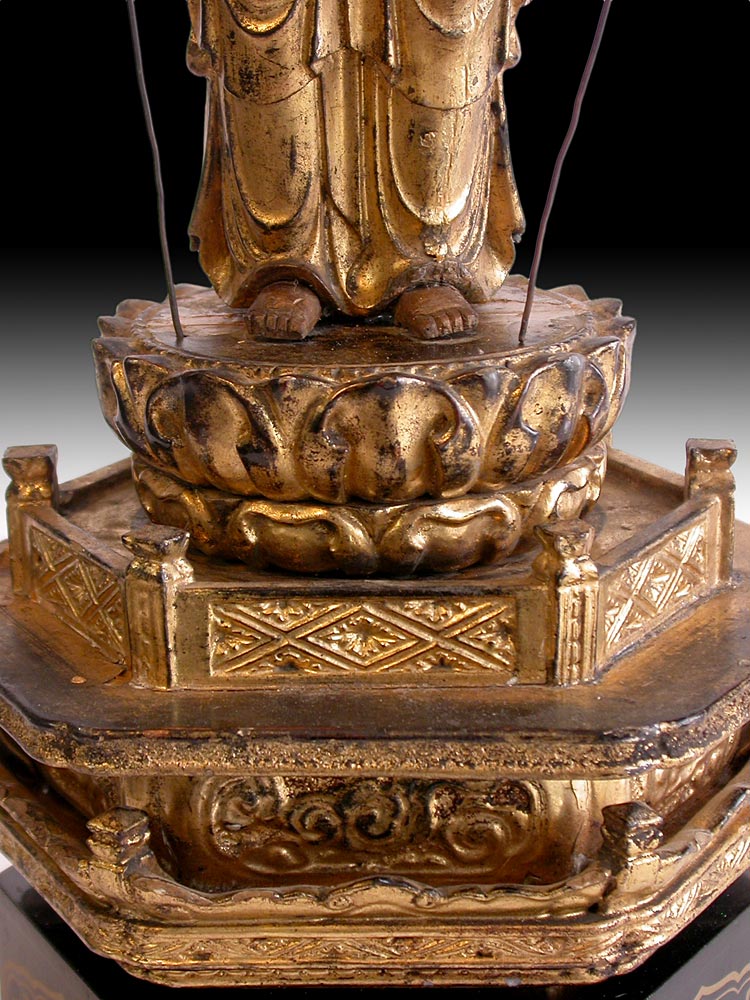